Thus the god and the nymph sped on, one made swift by hope and one by fear; but he who pursued was swifter, for he was assisted by love’s wings. He gave the fleeing maiden no respite, but followed close on her heels, and his breath touched the locks that lay scattered on her neck, till Daphne’s strength was spent, and she grew pale and weary with the effort of her swift flight. Then she saw the waters of the Peneus: “O father,” she cried “help me! If your rivers really have divine powers, work some transformation, and destroy this beauty which makes me please all too well!” Her prayer was scarcely ended when a deep languor took hold on her limbs, her soft breast was enclosed in thin bark, her hair grew into leaves, her arms into branches, and her feet that were lately so swift were held fast by sluggish roots, while her face became the tree top. Nothing of her was left, except her shining loveliness.[…] Embracing the branches as if they were limbs he kissed the wood: but, even as a tree, she shrank from his kisses. Then Phoebus said: “Since you cannot be my bride, surely you will at least be my tree. My hair, my lyre, my quivers will always display the laurel. You will accompany the generals of Rome, when the Capitol beholds their long triumphal processions. You will stand by Augustus’ gateposts too, faithfully guarding his doors, and keep watch from either side over the wreath of oak leaves that will hang there. 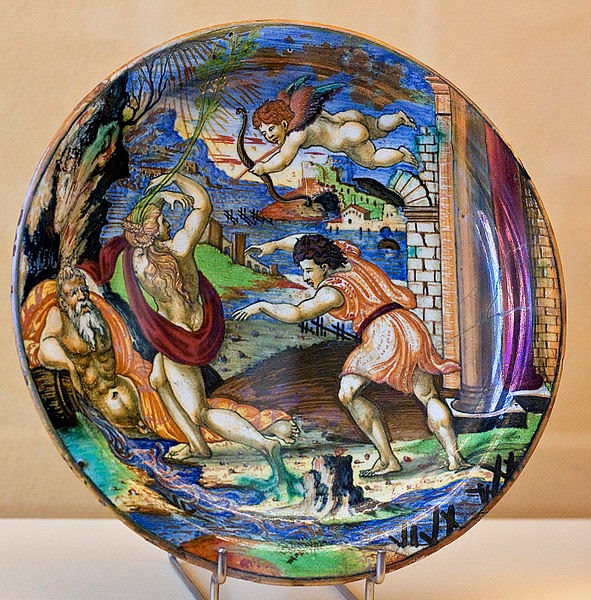 Daphne lived in a space wherein her beauty could call forth abuse. She rebels against the consequences of beauty, a beauty that would make her victim in the light of this Apollonian passion. But simple rebellion is insufficient to the task of freeing Daphne, instead there must be sublimation. The rape is concluded by her transformation into a vegetable form, her changed and repressed energy is then further atomised, becoming a decorative form, and “she” is finally condensed as the victor’s ornament.

The Roman Empire, as a continuous act of military invasion, might well be associated with rape and plunder, and laurel tree becomes merchandise of a colonised land, yet here we also see empire draping itself with this ambiguous sign of that which has escaped from it. So the stone laurel wreathes on gateposts; do they mean that one may escape through them or that, like an offering to a lingam, this post denotes a secure, phallic victory? Again, the laurel leaf is most often depicted in the form of a wreath, apt for mourning as well as victory; it is removed from the tree and shaped into a sign for absence, ‘0’, yet crowns the presence of those who have won as if they themselves were a tree.

Does not the protest and refusal of Daphne reverberate throughout this series of reversals? Has the mute ornament begun to speak of its sexual presence and a terrifying rush of passion that even a god-figure could not contain? Nonetheless, apparently such emotion can be stored within an innocuous formal pattern. A holding pattern. So a wreath of laurel would seem to be prime apotropaic material. The coiling and the diversion of sexual energy, the wreath as ‘0’, blank return, the statement of power (for the victor’s brow), and its placement at thresholds (foreheads and lintels), all find resonance with those amulets whose function it is to fend off curses and protect against the evil eye.

Such, let us say, instinctual urges to defend one’s property, family, livelihood, may be typified in the white, bright glossy white, ornamental lamppost standing at the end of the driveway, at the edge of the garden, a few steps away from the front door. Although the lamp itself operates, triggered by a movement sensor, so why do we call it ornamental? Because palmette line up around its base and from its cross bar (cruciform?), cast as a piece with the post itself, a laurel wreath. And it is all lined up so as to reflect and reject any envious, destructive, invasive eyes. A holding pattern. And, yes, ghastly object but ghastly upon more than one register. It echoes Moses’ use of the apotropaic to counter the venomous scourging of his people, a bronze snake lifted up in the desert, which is in turn amplified in John’s gospel as Jesus anticipates the low (snake, sin, bitten body) lifted high (crucifixion) and higher still (resurrection) as his own supreme gesture against fear and death.
Fear and death.

A holding pattern; such as those passenger jets are put into once over their destinations, disaster and safe landings both anticipated in a combination of tense geometry and languid loops, fear subsumed to control. At this point any excess aviation fuel is jettisoned so as to minimise the risks of its ignition. I am reminded of ‘Meditations in Green‘, in which during the Vietnamese War an American character, Griffin, plots where and how Agent Orange should be distributed:
shading in his wall map with tinted squares and rectangles of orange blue and white. The colors of the banner under which he marched. The irritatingly random clusters of black dots on Cross’s radar maps and the epidemic of measles on McFarland’s infrared maps couldn’t compare with the clean lines and bold composition of Griffin’s bright wastelands.

In a meeting with Le Corbusier, Piet Mondrian chose to sit at a table looking away from the window so as to avoid contemplating nature for which, apparently, he had an intense dislike. Is Mondrian’s art therefore an extended effort of not painting rotting fruit? And as such is it a descendant of the Dutch still life tradition?
Colourfield painting and defoliation. 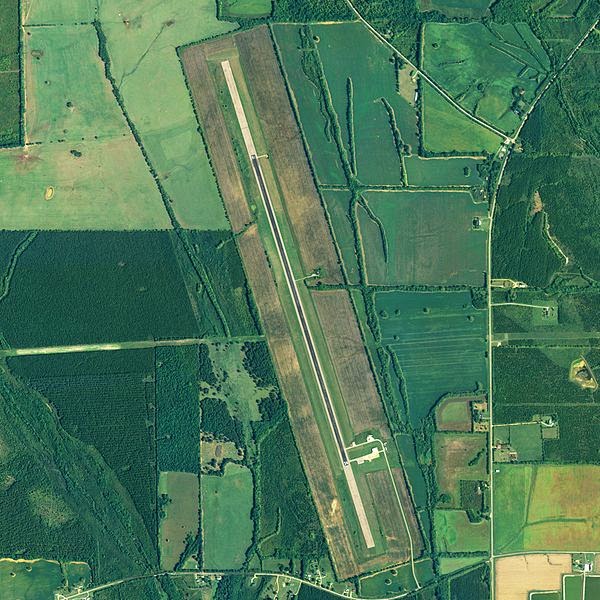 The grid marked ground of intensive agriculture; flat repetitions. The corn dolly laid to rest as Daphne’s sublimation is chased still further, from the sublime to Rothko’s suicide chapel of which Egar Allen Poe might write approvingly:

The tone of each picture is warm, but dark. There are no “brilliant effects.” Repose speaks in all. Not one is of small size. Diminutive paintings give that spotty look to a room, which is the blemish of so many a fine work of Art overtouched.

Interesting to note that both Griffin and Poe have aesthetic misgivings regarding spots and dots and that both are addicted to opiates. Was Modernism born during the Opium Wars (1839-42 and 1856-60)? As if chinoiserie only amounted to a series of irritations antithetical to the smooth, painless patterns of a modern commercial world. An outrageous supposition, no doubt, considering that this modern commercial world starts on so many instances of war. (For example: in 1854, Commander Perry had  forced the Japanese to reopen their country to European merchants and the effects, direct and indirect, soon made themselves felt, […] Sir Rutherford Alcock took a fancy to Japanese products and sent a consignment of specimens, which he had bought in the Bazaars of Yedo, to the International exhibition held at South Kensigton in 1862.) And chinoiserie itself became fashionable at precisely this time, perhaps in the same manner that laurel leaves made themselves at home in the Roman Empire.

Yet pattern is not meant to be a symbol.
It is a process, an experience.
It holds… And it releases.
It moves along… and holds.
To be blatant and latent, hidden, concealed, existing but not developed or manifest. Which means that to view a pattern there must be an inversion of one’s usual habits of perception; to see the frame, not the framed; to mark a rhythm, not the motif; to study a motif, not the image.

Although the motif is an image, does an image repeated in sufficient quantity and rhythm eventually bring about its destruction as image? Not the withering of aura, as Walter Benjamin postulated, but aura’s tainting, mutation and, perhaps, sublimation. Unlike the work of art, ornament was never expected to occupy an “unique existence at the place where it happens to be“ for, although it does occupy unique space and time, the expectation given to its role allows an escape. Escape, that is, from the scrutiny afforded art. As its authority as object is already undermined, its auric presence does not come into direct conflict with reproduction. This not so much because of taboo borders but because it moves toward a state without borders. It, in effect, becomes unapproachable:
Unapproachability is indeed a major quality of the cult of the image. […] The closeness which one may gain from its subject matter does not impair the distance which it retains in its appearance.

Daphne’s ardent desire for a beauty less obvious and less available was surely granted by becoming foliage, and foliage given over to the decorative in particular. (Can aura be sublimated? Daphne’s transformation creates distance, prevents closeness, and as this is already the definition of aura then aura is an effect of sublimation.)
Andrei Tarkovsky is quoted:
We can express our feelings regarding the world around us either by poetic or by descriptive means. I prefer to express myself metaphorically. Let me stress: metaphorically, not symbolically. A symbol contains within itself a definite meaning, certain intellectual formula, while metaphor is an image. An image possessing the same distinguishing features as the world it represents. An image — as opposed to a symbol — is indefinite in meaning. One cannot speak of the infinite world by applying tools that are definite and finite. We can analyse the formula that constitutes a symbol, while metaphor is a being-within-itself, it’s a monomial. It falls apart at any attempt of touching it.

Yet always, we must touch. We must try to touch. A metaphor may stand for the world but will it stand as the world stands? It has been said that true symbolism contains the reality it symbolises, yet how to grasp that? Yve-Alain Bois meanwhile denotes a symbol “in semiotic terms” as

a sign with no more than an arbitrary or assigned connection to any referent.
Symbols slip in and out of their world, break free from intellectual formula, are absorbed by other formula, become simply objects in the world and as such may be used metaphorically in an attempt to express the elusive world. And  thus, like Tarkovsky’s cinema, allusive patterns hang before us.
After laurel leaves a rosette is pinned to one’s lapel. Or a rose threaded into the hair, the long tresses themselves combed, twisted and shaped into ornate knots, a spiral mimicking the pursed flesh of a rosebud. I am reminded of how Hitchcock sculpted his actress’s hairstyles, especially so in Vertigo wherein the kiss curls of Judy are transformed into Madeleine’s bouffant and both serve only to repeat Scottie’s arrested fall (both physical and psychological) and add to the building crescendo which is also the promise of a continued spiraling descent.

Reading Charles Barr’s account of this film, checking up on Scottie’s improbably benign name, I rediscover the vertiginous sinking into the eye, the swirling petals, the posy, the spiral stairwell, but also as if for the first time see the blood red restaurant decor, voluptuous flowering repeat pattern, and a bronze ornamental plate hung on Scottie’s wall. The technical name for the pattern on this plate is a paterae, derived from Greek temple ornamentation. It originally represented the plate used to capture sacrificial blood. As Madeleine steps before it, dressed in a blood red robe, she is the sacrificial, the tormented; yet the wheel turns and it is next Scottie’s blood (sweat of dementia) it has to catch. Another reel and, by film end, it is Judy, transformed once more into Madeleine, who pays the ultimate price. The paterae when repeated along a cornice is called a money pattern. Blood money. And in the sleek utilitarian form of the modern car the hub cap becomes one of the few places on which decorative expression is allowed. Again, a motorised demand for blood sacrifice seems apt, given the hub cap’s resemblance to paterae.