Mano fica is a common apotropaic gesture. It consists of the clenched fist with thumb stuck between first and forefinger. The literal allusion is to the fig, whence “I couldn’t give a fig!”, but this is of course a migration of references both to the genitalia of either sex individually and co-joined in copulation. 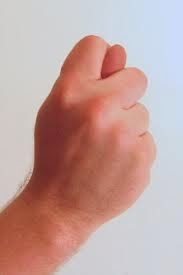 (Generally, the allusion has nowadays been eroded to the rather more blunt; “I couldn’t give a fuck.” While we might mourn this loss of metaphorical richness, the biodiversity of language if you will, still we must note that ‘fuck’ remains migratory by nature – and nurture. In fact ‘fuck’ is a very slippery character.)

The gesture now associated with the phrase “Sit and swivel”, the erect forefinger, this too is magic against the evil eye. Also the mano cornuta with little finger and forefinger raised while the remaining fingers and thumb are tucked into the palm. Up-raised this can possess the same phallic aggression as ‘giving the finger’, it is a goat sign, horned, horny, capricious. Demoted by some to the devil but originally a sign of virility, life, and therefore excellent protection against wizened envy, the wasting effects, dry hacking cough, and general irritation one will suffer if Overlooked.
Erect, the mano cornuta is sign of the delinquent, the ridiculous. It is a protective gesture that utilizes bombast; two penises counteract one penis – the one being the invasive stare. 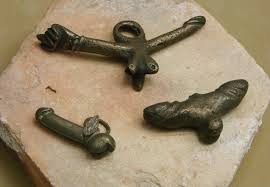 When fingers are pointed downwards this gesture is rather more subtle, not least of all for to ward of evil now it is best that the gesture be kept to oneself. It is a private reassurance, a sign made but not shown. It is “a Stone age woman-image, two legs and a vulva — so potency against the evil eye comes from the “horns” which are stabbed down, the virile element — but within that symbol is embedded the power of the goddess.” (Hakim Bey.)

The use value of the sign in both orientations leads us into the notion of copulation: what might this play, this coming together, this fusing of differences, this infinity and fall back to the finite, this collapse into difference  which might nonetheless create a unity, a third, the egg, the child – what might this possess that could both incite an envious evil eye and yet, simultaneously, by its own fecundity, form the very first defence against the evil eye? The answer of course is life pure and simple (in all its complexity).

Hakim Bey suggests how “The apotropaic complex is thus to be seen as neither male nor female nor even, properly speaking, androgynous. The symbols revolve not around gender but engendering, around life or energy itself as a value opposed to the negativity, the vacuum, the deathly cold of envy.”
From the rites of copulation there comes defence. To protect the offspring of miscegenation (and that is any act not explicitly ordained by the king) a labyrinth must be built. To celebrate spring, death and rebirth – first copulation – teenagers are linked by strips of fine cloth, they hold hands and, with the new vegetation entwined in their hair, they dance along this complicated pathway – into the centre – and then out again. It is exhilarating, confusing; it brings you to death but then it brings you to the sun.
This is not a village fete however. Certainly not a village as refracted through the neutralizing prism of broadcast bucolic careerism. It must be remembered that almost every aspect of our life can barely be reached by any means other than fiction. Countryside, no less than city, is a landscape of permission; even the wild parts are allowed. Having being ruthlessly appropriated and re-appropriated by successive landowners, by agri-businesses and army, even by the Freedom To Roam lobby, most of us are now convinced that this small island is no longer feasible without land management. Land management is a rapid alteration between exclusion and permission. There is a real danger that the few remaining village communities will come to resemble supermarkets of the bucolic simply in order to remain accessible.

Or perhaps the countryside near you, once you find it, will look different? You will scream paganism and horror and be sacrificed to an Otherness which you steadfastly refuse to understand.
Or is it, perhaps, that whatever sense of older and less banal fictions are still to be found, you will miss? They are the private business of a small place just off the motorway heading North or heading West. A tiny place and you do not bother to stop, you probably did not even notice it. And perhaps this is for the best because Arcadia has a rotten core. Those who partake of its being must dance around and dance into death. The labyrinth is dizzying, your mind can gain no hold on itself. This dance is a sick making rush. It is dark in here. And it stinks.

Minotaur, demon, or evil eye; these forces will find solace in some poisonous twist of the bowel. They will feed on decay rather than hunger for the sun and this is why for such creatures and their curses the labyrinth is not dance nor progression but a trap. And it is for this reason that one will find labyrinths inscribed above doorways, pinned on lintels, or hung around an individual’s neck.
A maze is not a labyrinth. In a labyrinth there are no tricks, dead ends, or rest points, with perhaps the exception of the centre; and one will not find mazes hung from lintels or worn as amulets. 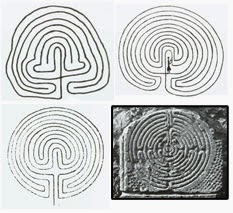 The record we receive of the labyrinth commissioned by Minos, designed by Daedalus, is ambiguous. Although the presence of ‘Death’ at its centre and the sacrificial nature of a seasonal requirement for seven youths and seven maidens is surely linked to the labyrinthine associations of death/rebirth, youth/adulthood, winter/spring – first copulation – and the passage of the sun during the night is said to be through an underworld just such as this – still one is made wary by the claims of how no one could ever find their way out of Daedalus’s creation. (Architecture, Mysticism and Myth, W.R. Lethaby. London; Architectural Press, 1974.)

String is entirely surplus to need in a true labyrinth. String may be used as a confidence building measure when an assassin chooses to inch into the darkness rather than, as a child, make a headlong dash. So if the impossibility of exit was actually a matter of bombast then do we likewise scale down Theseus’s status as Hero? Was he scared of the dark? Reassurance against the night, that is the significance of string. Yet the labyrinth in form is in and of itself the reassurance of night. This is the womb, here the sun is born and reborn. Or rather, the Earth the womb while the labyrinth is an umbilical cord. Wearing your own dried navel cord beneath your cap will protect you from cursing.
String is used as an amulet when it is red string, or a red rag. These are commonly tied to cows around their tails or horns and around a horse’s harness and around a child’s wrist or ankle.

To tie a knot in string in order to remember is also to recall the knotty path, a mnemonic of sacrifice, the child killed to become adult, sun murdered to be reborn. Knot as blood complex, an irruption of sacred into terrestrial, mundane into divine.

Marriage is reckoned to be a most vulnerable time and especially so if the gathered cannot but help to remark on how beautiful the bride looks. In the complications of the gaze and heart this praise will surely embitter the relationship and scour loins so that they produce only weak, poisonous fluids. There will be no children. In the newly wed’s yard the chickens will cannibalize their eggs. Eventually the bridegroom will sling his shotgun over one shoulder, march into the hills and never be seen again. This is why a bride wears a veil, so the astonishment of kinsfolk is not diverted into envy. In many places the veil was red. Blood red. In some places it still is. The groom will discretely touch his balls to secure the appropriate protection.
At most every threshold, psychic or physical, an apotropaic gesture or sign can be found. E. A. Wallis Budge, for example, cites the Babylonian Terracotta Devil-Traps; inverted bowls inscribed with magical texts. These were buried under the four corners of a building, especially beneath the foundations of a house. Interestingly the text always follows a spiral, the most simple or Ur-labyrinth form. But this is a strictly functional pottery, no musing on first copulation:

“O Thou eternal Good God, crush the power of the Devils and the spirits of the Fiends, the great power of Lilith… I drive you away from the neighbourhood of Bahran’s house, and from the house of Bathnium, and from all the regions round about them. As the devils write bill of divorce and cast away their women who never again approach them, so do ye accept [this] your bill of divorce, and receive your dowry which is [here] written, and get ye gone, betake yourselves to flight, make haste to depart, and forsake the house of Bahran and Bathnium in the Name of the Eternal God. Get ye forth into the darkness, away from the man of power, and sealed with his ring, in such wise that every man may know that ye are no longer there. And then shall be there a good light. Amen. Amen. Amen. Selah.”

Powerful language to make one’s head spin! Powerful language placed in a powerful form at a vulnerable point. As an individual is endangered during liminal experiences, so a building’s portals are the crossover points at which a certain care and attention is required if that building is to remain healthy. As the building, so the body; references, metaphors, and correspondences move up and down, twine in and out of each other. The body as temple has become cliché but one must remind oneself that this is so simply because of the force of the image, that it must be held in the ever present; like ‘worry beads’, the image becomes smooth, well worn, habitual. “My body is a temple” means that this temple, this dwelling, this body houses the divine. Fear of the evil eye is not, or is not always, a simple reaction against the invasion of the other. It is not simply pitting one’s own food, children, property and sexual well-being against every outsider’s unquestioning, rapacious, and immediate desire for possession. Of course it can be this, it can be many things, but an amulet, a gesture, a mark is also a token of care that signs humility. As opposed to a pitiless technocratic curiosity – which anthropological practices may aspire to under the name of objectivity – to guard against an evil eye is to admit to awe, wonderment, and it is this aspect of a near religious observance (reverence rather than worship) which reminds us of the temple-body linkage.
Original first published in Inventory: losing, finding, collecting. Vol.3 No.2 1999.