the earth is struck from above and below simultaneously. The shelves bulge as if a rubber mask suddenly and grossly inflated. Manuscripts and sheaves of paper and reports cascade upon us. As we burrow through this academic rubble we exchange further reports of our language clogged reverie, explaining in detail how, when dreaming of books, those books are always wanted. Books violently desired. Books hoarded and piled high and of impossible reach.

A fearful droom. The human resource department have a token system by which to reward good uniform, although no one outside of the department is aware of this. 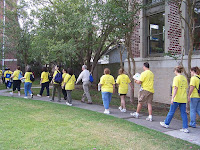 An anxious dream. The head of department is collecting brightly coloured tokens in a very large bowl.

An overwrought fantasia. Students remove an entire bay of shelving, taking even the brackets off the wall, and begin to fill this disrupted space with their own artistic creations. The bowl of tokens is tipped over but the rebellious learners are brazen and casual about the anarchy thus far inspired.

An instructive musing on a series of concentric constrictions.

We dig a labyrinthine set of tunnels and pits and then watch it fill up with our own projections.

Bureau is from burra, a shaggy cloth used for covering desks and tables. Bureau is the covered writing place; bureaucracy is to set in order by a covered form of writing. If a root is not rested upon then it will not be squashed, it will not become scratched nor in any manner disfigured.

The written surface is always disfigured.

Veils are pulled over an essentially uncontrollable situation. Once a fine collation of layers settle, then the layers may be controlled.

Language is immaterial and material simultaneously. Language is in the same moment layered and controlled, revealed and uncontrollable. Emptying and approaching; the gift I have hidden is the gift I also wish to reveal.