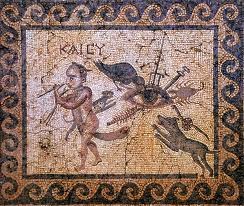 The much suffering eye.

Gestures and prayers, magic words and waters drunk and symbolic objects placed around a space; these things – where they exist – have always existed and continue to exist. They may warp or mutate with the weight of passing time but there is a persistence of need. A continuing necessity to touch wood, to keep terror in abeyance. A need – beyond mere want – for reassurance of any shade. To do, say, or pray; to make a gesture, however small, which ensures that the flux of life will not entirely overwhelm your loved ones, your livelihood, yourself. Children, cattle, milk, youth and beauty: always these have been under threat from the evil eye and so they are surrounded by safety devices, be it gesture, word, object. This, ironically perhaps, means that if an item or person is vulnerable to the evil eye so too that item or person will be under constant scrutiny.
Much has been made of the gender of evil eye. Maternal instincts might use this threat to control and corral their charges. It is the phallic eye we are particularly to guard against, so much so that some recount how fathers would be banned from seeing their newborn, touching doubly taboo. Likewise, it has elsewhere been noted how able women were at casting an evil eye. Although the widow of renown ability might receive gifts to pacify her fearsome glance (which in an economic sense will bring the community in to act as a support when that woman has no family to fulfil this role), so too could a woman’s Overlooking be policed against by the concerned community, male or female. What better way than to control the unsettling presence of an independent woman than to ambush her and to deeply score across her forehead with a blade or nail, these implements to be made of iron by preference? Yet too, instances have been noted of men in possession of a powerful eye. So in dread of their ability were they that they would endeavour all their days to avoid looking directly upon an object or meeting another’s gaze. On receiving their glance buses would stall and vases tumble, if perchance they looked at a half constructed building then that building was doomed to remain incomplete; bricks would fall, scaffolding crumble. This tragedy is concluded by the afflicted catching a glimpse of themselves in a mirror or plate glass. Thereafter some dropped dead instantly while others wasted away by means of a long, agonizing disease. Which recalls ‘Film’, for instance, by Samuel Beckett: “In order to be figured in this situation the protagonist is sundered into object (O) and eye (E), the former in flight, the latter in pursuit.” (1963. Collected Shorter Plays of Samuel Beckett. Faber and Faber.)
It should also be mentioned that in order to divert the evil eye builders hang teddy bears by ropes from their scaffolding. They sometimes crucify them, torture them to shock, to stop the malignancy at that point. You will see the martyred teddy bear still on heavy goods vehicles. Likewise, in some regions it is thought best to leave some imperfection about a building as there is nothing that so inspires Mal’uocchiu as perfection. If gender specific notions can at times be as cutting as the eye itself, overall the phenomena still remains ambiguous. That is, it maintains a right to switch polarities at will. Dundes states: “The equivalence of eye and phallus may be suggested in ancient Egyptian mythology when Horus battles Set. Set tears out one of Horus’s eyes and Horus counters by tearing off one of Set’s testicles.” While from near contemporary USA there comes the “well-known pretend obscene riddle” in which eye and vulva are given an equivalence: “‘What’s round and hair all round it and nothin’ but water comes out?'” (Wet and Dry, the Evil Eye. Alan Dundes, 1981. The Evil Eye, A  Casebook. Ed. Alan Dundes. The University of Wisconsin Press, 1992.) 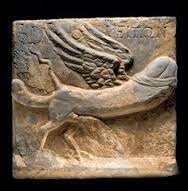 An evil eye is no more or less complex than an eye. Eyes and genitals, we all suffer and pleasure in the complicated reactions that go on between these distinct and yet intimate regions. Both may be associated with aggression and yet both are sensitive, vulnerable organs. How, then, to protect?

To protect is also to camouflage – whence eyes tattooed on an arse  are exactly like a butterfly. This artifice defuses sexual aggression. In a volatile atmosphere the boundaries are stated without necessarily having to be tested. Elworthy describes an attitude of contempt and notes it as a powerful prophylactic. He outlines a repertoire of gesture and image that operate via a magical logic of like to like, as above below, or, influence at a distance. Here it is typified in a marble relief: “The centre is a large human eye […] the left, which may be considered a special feature of its sinister intention, and moreover the pupil is strongly marked. Over it is a very prominent eyelid and arched brow. Above this is seated a beardless man in a Phrygian cap, with his back towards the spectator […] He is squatted down with both hands on his knees, has his shirt pulled up, and strikingly…” Arse! “[…] the common typical expression of the utmost contempt.” 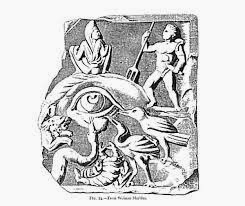 This eye is simultaneously attacked by a lion, snake, scorpion, stork, crow and an armed gladiator. All harm that this eye might emit is returned sevenfold. If the marble does not operate in the exact fashion of the above mentioned glass or mirror on the unfortunate possessor of an evil eye, still it acts as a powerful warning: a powerful warning is a distraction. Distraction is all that is needed because the evil of an evil eye is delivered by the first, the direct, and true gaze. Otherwise the effect is lost in amongst pattern, symbol, or glitter. The amulet’s counter magic; an emotional circuit breaker.
Plutarch, states Elworthy, explains that: “the objects that are fixed up to ward off witchcraft or fascination derive their efficiency from the fact that they act through the strangeness and ridiculousness of their forms, which fix the mischief working eye upon themselves.” (The Evil Eye, An Account of this Ancient & Widespread Superstition. Frederick Thomas Elworthy, 1895. London, John Murray, 1895.)
Fascination.
“There be none of the affections which have been noted to fascinate or to bewitch, but love and envy; they both have vehement wishes, they frame themselves readily into imaginations and suggestions, and they come easily into the eye, especially upon the presence of the objects which are the points that conduce to fascination…” (Of Envy. Francis Bacon, 1625. Quoted by Elworthy, op. cit.) 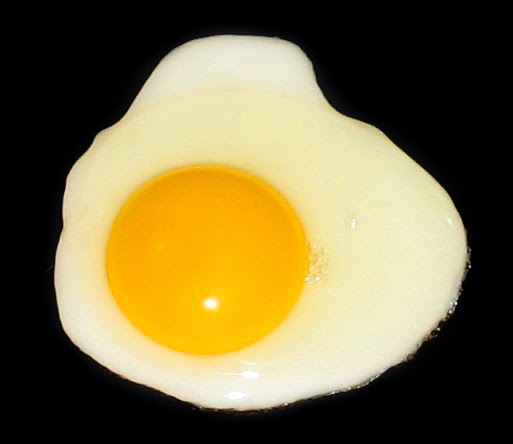 The egg, of course, is a particularly powerful object. It operates as a transformational object, a migratory metaphor. It can be the Universe, a womb, a testicle, an eye. Or like any good cigar, it is sometimes just an egg. Yet as any good cigar is also a combustive event, so an egg is also meat, is also a child. Eggs are commonly used in the divination and cure of the evil eye: “A positive diagnosis is made when the egg appears cooked, or the yolk appears to have the image of an eye. The most effective remedy is to have the perpetrator touch the patient as soon as possible. [Otherwise…]
1. a fresh egg is passed over the patient’s body;
2. it is broken into a bowl of water and covered by a cross of palm or straw; and
3. put under the head of the patient’s bed.
4. The patient is then put to bed for the night and in the morning the egg is examined; if it curdles then that indicates that the Ojo is cured and the egg is then disposed of.” (Ojo meaning “strong glance”, or evil eye in Hispanic folk tradition. http://www.rice.edu/projects/HispanicHealth/Courses/mod7/ojo.html)
The fan as fattucchieri with a malignant touch. Always trying to touch the object of adoration; perhaps the fan more than anyone else would be surprised to learn that the true intent of this touch was destructive? Love whose consummation is impossible creates a loved object whose possession is infinitely delayed, permanently incomplete. The subject of praise becomes the object of envy. If the passion is intense enough and the delay of the passion protracted enough then, imagine, what dread malignancy might arc across any contact should it arise! Only occasionally does the latent became manifest in the suicide or celebrity skewed killing spree…

And as for every physical or emotive aggression arriving from outside so we must presume at least double that in destructiveness welling up from an artists’ own being, the infamous drink/drugs/creativity co-ordinates; so we might pause to consider the multifarious ways of the gaze in the ‘star system’. An object of admiration microwaved by the attentive, by attention, admiration, lacerated by their adoration. Although one must remember that Narcissus – more than likely – cursed himself, his own envious eye turned upon his self regard, still presume that for each defacement of a poster or curse ejaculated before the TV there is an equivalence in psychic trauma. All of which would cause the ‘star system’ to implode overnight if it were not for the concerted apotropaic actions of veneer, gloss, spin.
And still the evil eye is more complicated for if the fan is implicated in their invidia, their quietly nurtured resentment of the shining object, what then of the iconic beams that radiate comic book style from out the eyes of countless reproductions? The pop, film, sport ‘star’; the multifarious ‘characters’ or ‘personalities’ (even if ridiculously typecast) endlessly issuing the command: ‘Love me, love me’ which is underwritten by; ‘Be like me, be me.’ Which is to say; ‘You cannot be like me so I shall shine gloriously for you’, or rather; ‘at your expense’. All to conclude: ‘Envy me. Buy me’. Is it not the fan’s very being that this ‘star system’ has its envious gaze fixed upon? Maybe system has become pattern. An intrinsically chaotic rather than controlled pattern: same, different, endless.
Original first published in Inventory: losing, finding, collecting. Vol.3 No.2 1999.